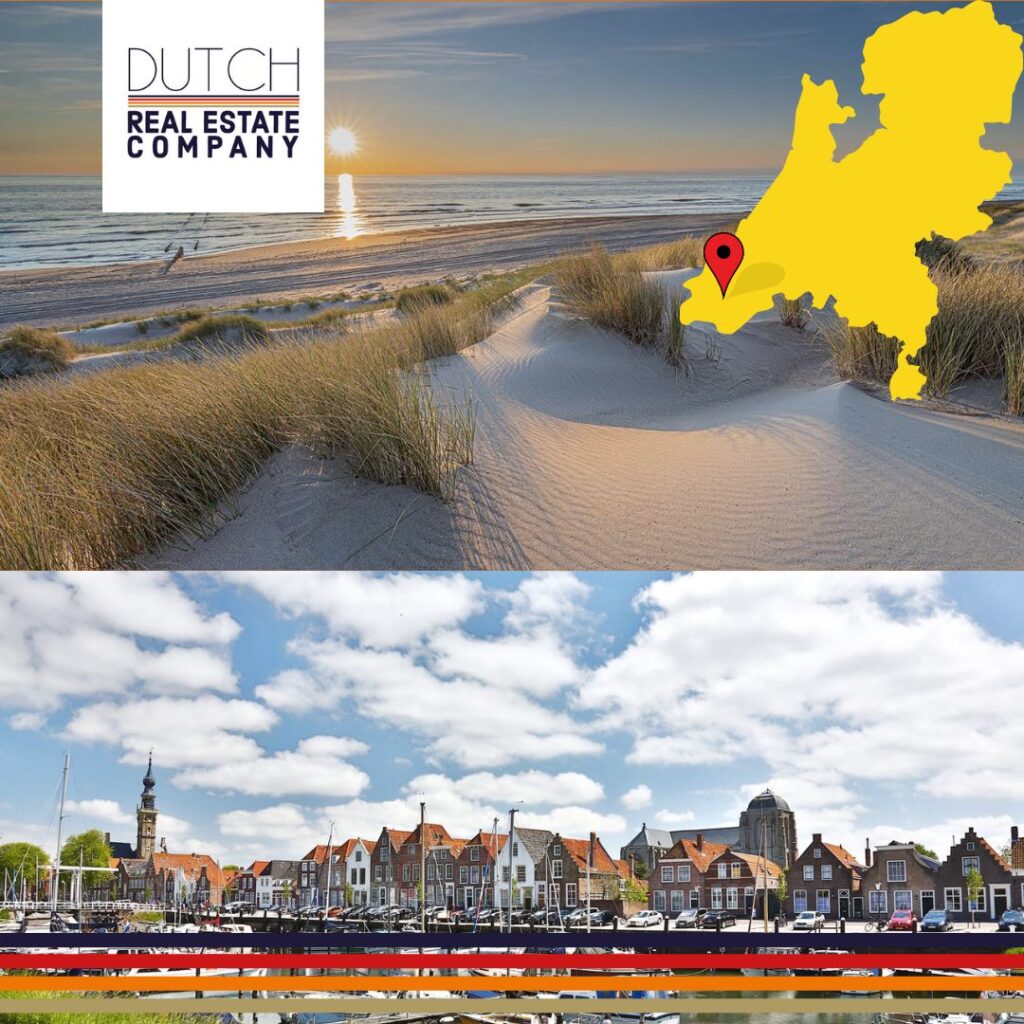 Zealand, province of beaches and seafood

The eighth province we visit is one of the southernmost provinces of the Netherlands! The province was already inhabited in Roman times and has a turbulent history, including a huge flood disaster and beautiful beaches. The largest city of this province is Middelburg (+-39,200 inhabitants), and is also the provincial capital. Zeeland is located on the North Sea and is also the province where one of the Netherlands’ most impressive buildings is located, the Delta Works.

Zeeland has approximately 383,500 inhabitants, has 13 municipalities and has the longest beach promenade in the Netherlands (in Vlissingen). Zeeland has an average of 217 inhabitants per km² and the average asking price per m2 of a house in the provincial capital of Middelburg, Zeeland, is € 2816.

Zeeland is a fantastic place for all water-related activities. Also, New-Zealand thanks its name to Zeeland. The Dutch explorer Abel Tasman (who is also the reason why Tasmania is called Tasmania) discovered the island in the pacific in 1642 and called it New- Zeeland. Here we give you some tips for your trip to Zeeland!

In the night from Saturday January 31 to Sunday February 1, 1953 Zeeland was hit by a terrible flood disaster, which caused a lot of damage and lost lives. Due to a storm surge and spring tide, the water in the southern North Sea rose to such an extent that 200,000 hectares of ground were submerged. Buildings and houses were destroyed and about 100,000 people lost their belongings. What (emotional) impact has this disaster had on the Zeelanders? How do you rebuild the affected parts of the country? How do you avoid a second disaster that can never be ruled out?

The Flood Museum is located in the four caissons, in Ouwerkerk – Zeeland, that were used to close the last stream hole. When you walk into the museum, you step into the history of water from ’53 to the present. Discover what the museum tells you about water and the importance of protection from the water.

The Manteling van Walcheren is the most varied coastal area in Zeeland. The nature reserve is one of the few places where you can see in the landscape how dunes come about and change in a natural way. Thanks to the unique effect of wind and water, you can see high dunes, wet dune valleys and dry grass dunes. It offers everything a nature lover could wish for. Various hiking routes take you along the Manteling van Walcheren.

The Manteling van Walcheren is located at the tip of Walcheren, between Domburg and the Veerse Gatdam. It consists of old country houses, woods, stretches of dune (directly bordering the ever audible North Sea), stately avenues and winding paths. From the 17th to the 19th century, Middelburg’s elite lived here in the summer. In the 20th century many houses were permanently inhabited or an institution moved in.

The town hall of Middelburg, located on the Markt, is a town hall built in late Gothic style. Construction started in 1452, led by several generations of the Keldermans architect family from Mechelen, and lasted until 1520. The town hall has a tower with a clock and a carillon. Middelburgers call the tower Malle Betje, because the clock is always behind that of the Lange Jan.

In 2009, Trouw organized an election for the most beautiful building in the Netherlands, with Middelburg’s town hall coming in second.

An imposing castle, a lush castle forest and an open dune area. You will not find such a trinity together anywhere else. That makes this nature reserve very special. Here you can walk along the history, but also through a dynamic dune area where you can enjoy a breath of fresh air and watch birds.

The nature reserve owes its name to the fairytale castle from the beginning of the 17th century. Inside, everything takes you back in time: from the atmospheric knight’s hall with beamed ceiling to the tiled floor, the furniture and the coat of arms above the fireplace. The current appearance is largely due to the chronicler Jacob van den Eynde, who rebuilt the castle after a devastating fire.

You can visit the castle with the walled castle forest on Heritage Days and during excursions and special activities.

Vlissingen is a lively seaside resort and a popular tourist destination which attracts thousands of visitors every year. As well as the marvelous location by the sea, Vlissingen offers numerous beach pavilions and a diverse nightlife.

Vlissingen is located on the Walcheren Peninsula in Zeeland. The area is known for its excellent walking and cycling opportunities. You can also enjoy activities on the beach, and stroll along the Vlissingen beach boulevard. In the summer, the chances are that you’ll find a music festival, a market or a funfair.